I've been making chocolate professionally for about 25 years.  It's not a big fat brag, it's just what I do.  You'd think I'd have it down by now. That's what I think most of the time.

I've had it in my head to bring back an old favorite, Figaro, to the shop.  It's been in my head for a few months now.  I just could never find the time, it seemed. I realized at the start of the week that in fact, that wasn't true.

I hadn't made it in years, maybe a decade.  I have shadowy memories of it only being partially successful.  After I had made it a few times, I still didn't feel like I owned the recipe.  It harshed my candyland mellow, and eventually I dropped it from our repertoire.

I'm old enough that I don't like not being an expert at my job.

I've got a birthday coming.  Such stupid thoughts in the face of another ring around the sun, said I!

I got all the ingredients last week, and then I put it off again, until just yesterday.  I'll tell you what: when I flubbed the first batch, I wasn't surprised at all.  Not a whit! Don't get me wrong, it was super tasty.  Just wrong.  In lots of ways.

After retreating into my office to do some non-threatening paperwork, I thought about it some more. Double checking my math, my ratios.
The thing about making a mistake in chocolate (especially Figaro), is that it's costly, and I dislike wasting money almost as much as not being an expert. Double whammy, mammy, get on your horse and ride!

Second time was a charm, but the best part of the whole process was having a laugh at myself and who I think I am sometimes.  It's got me all jazzed up to make some more mistakes.  We're just heading into a fairly predictable summer season; there's plenty of time and space to work on some new ideas.

Or maybe just make some of the things I love best.


Stay tuned.  Who knows what could happen next.

Posted by Turtle Alley Chocolates, Hallie A. Baker at 1:20 PM 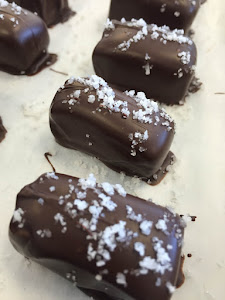